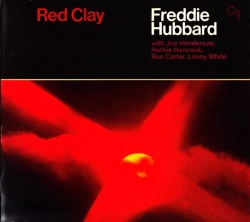 This may be Freddie Hubbard's finest moment as a leader, in that it embodies and utilizes all of his strengths as a composer, soloist, and frontman. On Red Clay, Hubbard combines hard bop's glorious blues-out past with the soulful innovations of mainstream jazz in the 1960s, and reads them through the chunky groove innovations of '70s jazz fusion. This session places the trumpeter in the company of giants such as tenor saxophonist Joe Henderson, pianist Herbie Hancock, bassist Ron Carter, and drummer Lenny White. Hubbard's five compositions all come from deep inside blues territory; these shaded notions are grafted onto funky hard bop melodies worthy of Horace Silver's finest tunes, and are layered inside the smoothed-over cadences of shimmering, steaming soul. The 12-minute-plus title track features a 4/4 modal opening and a spare electric piano solo woven through the twin horns of Hubbard and Henderson. It is a fine example of snaky groove music. Henderson even takes his solo outside a bit without ever moving out of the rhythmatist's pocket.

"Delphia" begins as a ballad with slow, clipped trumpet lines against a major-key background, and opens onto a midtempo groover, then winds back into the dark, steamy heart of bluesy melodicism. The hands-down favorite here, though, is "The Intrepid Fox," with its Miles-like opening of knotty changes and shifting modes, that are all rooted in bop's muscular architecture. It's White and Hancock who shift the track from underneath with large sevenths and triple-timed drums that land deeply inside the clamoring, ever-present riff.

Where Hubbard and Henderson are playing against, as well as with one another, the rhythm section, lifted buoyantly by Carter's bridge-building bassline, carries the melody over until Hancock plays an uncharacteristically angular solo before splitting the groove in two and doubling back with a series of striking arpeggios. This is a classic, hands down.

In the raft of populist jazz fusion made by contemporary electric guitarists, everyone should be thankful there is Michael Musillami. Moving further into the realm of truly original modern creative music, he continues to assert himself not only as a very competent performer, but especially as one of the most innovative composers on the scene. He is usually backed by small ensembles of great musicians who are very capable of propagating his basic precepts into expanded horizons of quirky, intriguing, and intricately woven jazz fibers. Longtime bandmates bassist Joe Fonda and drummer George Schuller are here again for this, Musillami's 12th CD, with additional support from veterans like alto saxophonist Marty Ehrlich, trumpeter Ralph Alessi, and rising star vibraphonist Matt Moran.

This sextet is potent, equally as able to turn on a dime, ride with the wind, or hop aboard a freight train of steaming power and perseverance.

The pieces also have clever titles -- "Splayed Fingers," for example, uses various separated segments, from walking jazz to Thelonious Monk phraseology sped up, laid out sideways, oriented in the blues, slowed as if drunk, displayed via free-time guitar, and capped by Moran's swinging solo. "Wisteria Hysteria Blues" is not so much manic as it is a slinky theme that blossoms into a deliberate stride with all instruments tromping in line like a phalanx. The complex bop "Bill Barron," for the influential educator and saxophonist, reflects his angular hard bop aesthetic, while a march into scattershot melody on "Ga-Ga-Goosebumps" (love that title!) bounces off the walls in funky symmetry with a hip and heavy midsection. Ehrlich and Alessi constantly prove to be the best improvisers on their instruments, consistently reaching fresh harmonies and nuances that rise above their peer group, while Moran is making his voice heard in a positive new direction post-Gary Burton. Writers who use lead pencils and erasers, as well as listeners, can easily relate to the CD's highlight, "Graphite," a fluid, cursive discourse, at first slow and pensive, then stretched out. This literary-inspired chapter and verse are translated to music through waltz swing punctuated by spiky exclamation points in drawn-out compound sentences with commas but no periods. Though Musillami has offered larger-ensemble works before, this is clearly his best attempt, a marvelous new music recording of great depth and vision that retains its vibrancy upon repeated plays, and comes highly recommended.