T-Bone Burnett - The B-52 Band & the Fabulous Skylarks

Though J. Henry Burnett's solo recording career wouldn't begin in earnest for another eight years (under the name T-Bone Burnett), it actually had its inception in 1972 -- three years prior to joining Bob Dylan & the Rolling Thunder Review and five years before the Alpha Band's self-titled debut -- with the release of The B-52 Band & the Fabulous Skylarks. And while the B-52 Band included two future members of the Alpha Band (bassist David Jackson and drummer Matt Betton), there's not a lot here that would put you in the mind of that band's three late-'70s records, even if songs such as "We Have All Got a Past", "Bring Me Back Again" and "Money Changer" may hint at what was to come. Throughout the various stages of his recording career, Burnett has often been one to subvert the roots of rock & roll, blues, folk and country when needed, but musically he and his cohorts play it relatively straight here. The album's blues and rock & roll seldom stray from the ordinary, while elsewhere, songs that tip their hat to Dylan or the Band, though they may show promise, don't always stay with you. There are enticing moments throughout, but as soon as it seems as if they have you, Burnett, the B-52 Band and backup singers, the Fabulous Skylarks fail to really close the deal. And while as a writer Burnett certainly knows how to craft a song, there are a number of otherwise good ideas that never quite reach fruition, seeming to hit the wall about halfway through. Fans of T-Bone Burnett's later work may find The B-52 Band & the Fabulous Skylarks of interest, but all in all this is a fairly unremarkable, albeit respectable debut from an artist who would go on to greater things on his own, with the Alpha Band, and as a Grammy winning producer. [Originally released by Uni in 1972, the 1994 CD reissue by One Way Records contains two bonus tracks, "I Don't Want to Hear You Cry No More" and "Linda Lu."] 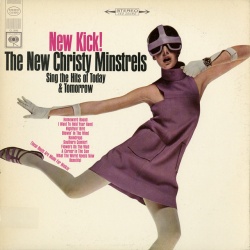 Few pop groups were as irrelevant in 1966 as the New Christy Minstrels' extended acoustic folk aggregate. Although the title New Kick! (1966) projects an optimistic future, internally the combo was split between its consistent demand as a live act and creatively disappointing outings such as this.

By the mid-'60s none of the founding Christys remained in the fold.

The lack of a central musical force or direction left them at the collective mercies of their management team, who owned the name and admittedly knew more about the Christys' payroll than their play list. The steady stream of new talent infuses the material with a fresh perspective, although some arrangements are inevitably better than others. Unfortunately, the album opens with a less-than-inspired overhaul of Paul Simon's "Homeward Bound." The melodramatic ensemble reading all but removing the intimacy of the original and is certainly incongruous given the introspective lyrics. Here, it is akin to a Mitch Miller singalong or an Up With People presentation.

A slow and moody cover of "I Wanna Hold Your Hand" follows to equally erratic results, recalling the Sandpipers' swipe at "Things We Said Today" -- the latter of which would be considered comparatively successful. The tide turns however for an affective "Highflyin' Bird" (aka "High Flying Bird") as Bob Buchanan's husky lead harks back to Fred Neil or Hoyt Axton and similarly shines on "A Corner in the Sun." Sadly, any goodwill is rescinded by the inappropriate galloping pace and feigned drama on the overhaul of Bob Dylan's "Blowin' in the Wind" or the worst (or best, depending on how you're keeping score) offender, "These Boots Are Made for Walkin'." So unconvincing is the Christys' borderline farcical and socially out-of-sync interpretation, it easily makes a case for co-dependant relationships. The New Christy Minstrels continued for several more years, even scoring a final entry on the Top 200 LP chart as late as 1970.

Yet undeniably, the soul of the Christys had dissipated to the point of the unit becoming nothing short of a caricature of its former glory less than a half-decade earlier.

Essentially a solo project for Spinning Jennies frontman Jeff Shelton, the Well Wishers' Twenty-Four Seven is a blissed-out smack of honey that's fueled by late-summer sunsets and misguided road trips. Power pop, while disposable, is hard to throw away when it sounds this good. From the very first lick it's evident that Shelton knows how to sink a hook into you.

"See for the First Time" delivers the same kind of instantly gratifying melody that made Brendan Benson's "Tiny Spark" such a pop underground hit -- both songs celebrate the heavy guitar/analog synth interplay that the Cars perfected 20 years ago. Vocally, Shelton has the kind of fluid, vibrato-less croon that so many singers yearn for, so comparisons to Andy Partridge are inevitable, but the punchy production and tube-blown sound of tracks like "Sex & the Suburbs" and "Bustin Up" owe more to Cheap Trick and the Posies than they do to XTC. He breaks out of the mold occasionally with wistful ballads ("Dead Again") and country-rockers ("Something on Your Mind"), but rarely deviates from the pool of hummable melodies and hooks that has so obviously influenced him since his first Kiss record. There's honestly not a bad song on the album, and despite the occasional detour into teeth-rotting lyrics like "Drop me a note/Send me a line/Bring me good wishes from my lonely, funny valentine," the joy that went into making these delicious morsels is evident throughout, resulting in a great collection of songs to make out, break up, and get nasty in the back of an El Camino to.