Zero Ohms - Soundfall to the Infinite

Marcus Miller followed his debut LP, Suddenly, with this self-titled PRA/Warner Bros. album released during summer 1984. His fusion of funk/R&B/jazz is well-balanced on this effort and better represents his formidable talents as a bassist/songwriter/producer/vocalist/multi-instrumentalist. The high-energy "My Best Friend's Girlfriend" charted R&B and became a dance hit with its 12" version becoming a post-release favorite. Funk workouts like "Unforgettable" and "Juice" are balanced by crystalline ballads "I Know the Perfect Guy," "Is There Anything I Can Do," and "Nadine." [Some of the songs are listed on the 2000 JVC CD The Best of Marcus Miller.]

So where has Montreal trombonist/composer/bandleader Claude St-Jean been since the release of L'Orkestre des Pas Perdus' Maison Douce Maison in 1998? Thankfully, it appears that he's been keeping his energy level up with triple shots at espresso bars on Rue St.

Denis while dreaming up a full CD's worth of brass band riffs and melodies to bombard listeners with on 2004's Mondo Cuivro. And his old OPP friends -- Maxime St-Pierre on trumpet, Jean-Denis Levasseur on alto sax and flute, Roberto Murray on tenor and baritone sax, Jean Sabourin on sousaphone, and Rémi Leclerc on drums -- are all present and accounted for on the 12 punchy tracks of this C4 Productions release (the band's first two CDs were issued by Ambiances Magnetiques). Like the best brass band composers, St-Jean uses counterpoint, bright harmonies, and just the right amount of complexity to make his group sound much bigger than a sextet. OPP has a classic brass band sound that draws on traditions from Eastern Europe to New Orleans, the Caribbean, and Latin America, but -- perhaps due to the funkiness, expressive solos that would perk up any jazz fan's ears, clever compositions, and propulsive grooves -- the group has a contemporary edge that makes it entirely at home at the occasional avant-garde music festival.

While "Yé!" reveals that OPP can swing with the best of them, "Skagogo" features a ska rhythm (you were expecting OPP to settle for a more sluggish reggae tempo?) and brings in some digital-delay effects.

Such electronic treatments (also featured on the last track, "Où Allons-Nous?") are the biggest sonic departure from OPP's previous efforts, but they don't detract from the band's pleasingly organic sound -- likewise the contributions from bassist Tommy Babin (Les Projectionnistes) and percussionist Raffaele Artigliere, who are used intelligently on a number of tracks to enhance and embellish the ensemble rather than hog the spotlight. (Babin might've been added to share some of the low-end responsibilities with sousaphonist Sabourin, whose lips are given quite the relentless workout and must need a rest every once in a while.) Meanwhile, St-Jean and Murray in particular bring a large dose of fire to the front line -- including some wild baritone sax from Murray in the hyper "L' Épié dans les Plats." "Arbracamentête" summarizes many of the group's strengths, including not only tight and funky changeups but the beauty that a subtle touch can bring to a percolating groove -- creating music that hits a cruising altitude and flows forward with both power and agility, with no need to hammer the rhythm home. This is the type of performance that hugely satisfies at all levels and places OPP at the forefront of the world's groups exploring and extending the brass band tradition. Welcome back, and let's not wait six years for the next one. 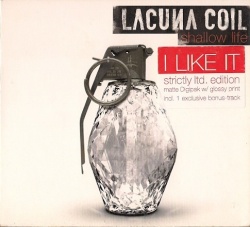 Having sold a few hundred thousand copies of each of their most recent albums in the U.S.

alone (quite rarefied levels of unit-shifting for an independent heavy metal label like Century Media), Lacuna Coil was undoubtedly under pressure to deliver another winner while preparing 2009's Shallow Life -- the Italians' fifth full-length in a decade-plus career. With so much riding on the results, a promising preview single called "Spellbound" was released a few months ahead of the album, and it suggested a determined return to the dramatic, if ever concise, brand of goth-metal (tickled by reserved symphonics and electronics) of the band's breakthrough opus, Comalies. But instead, it turned out to be one of just a few exceptions (see also "Not Enough" and "I Like It") amid Shallow Life's concerted push towards ever more accessible, radio-friendly, and, despite the band's best efforts, homogenized electro-rock. For starters, there's the dizzying array of electronics absolutely dousing the album's initial couplet of "Survive" and "I Won't Tell You," and later the vaguely Depeche Mode-like "The Pain" and the title track's tepid balladry, to the point of subduing the higher and most sustained reaches of Cristina Scabbia's vocals -- or else layering them with counterpoint soccer chants in a bid to replicate Karmacode's top single, "Our Truth." And then there's the prevalent guitar tone utilized throughout, which will have listeners scrambling for their CD booklets to see if nu-metal's most infamous producer, Ross Robinson, was involved in the sessions.

He wasn't, but most all of his trademark textures sure were (see the particularly painful "The Maze"), courtesy of his disciple Don Gilmore, who is best known for his work with Linkin Park and certainly earned his paycheck for these sessions if the directive was transforming Lacuna Coil into Evanescence.

The primary conclusion being that songwriting versatility alone does not risk-taking music make, if those disparate elements have all of their edges sanded down, rather than serrated enough to leave indelible scars on the listener's memory banks. (Having said that, we should mention the gorgeous, densely orchestrated ballad, "Wide Awake," which will hardly convince the extreme metal masses to lay down their torches, but definitely harks back to Lacuna's most celebrated releases.) In all fairness, Shallow Life, does come on very much as expected based on Lacuna Coil's preceding career arc, and many observers would argue that backtracking isn't the solution either if a band is to prosper in the long run -- but it may have to be here, given the underwhelming sales and vociferous critical backlash bestowed upon the album.