Nat King Tron - In the Presence of Peasants

Brian Wilson - What I Really Want for Christmas 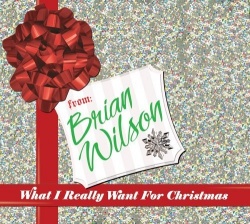 The format for single-artist Christmas albums has remained static nearly since the dawn of the LP: a popular artist reprises his sound of the moment in a Christmas setting, sometimes mixing sacred material with secular, but always generating a time capsule that rarely holds up to repeated listenings. The Beach Boys recorded one of the best rock Christmas records of all time, and contributed an even rarer thing than a good holiday album -- a new composition to add to the canon in "Little Saint Nick." Brian Wilson's first solo Christmas album (although he did attempt a second Beach Boys edition in the mid-'70s) was recorded with the same group that made his 2004 SMiLE LP, and it shows the influence of that record.

The two new songs are intriguing because each pairs Wilson with a great rock lyricist.

The first, "What I Really Want for Christmas," finds Bernie Taupin thrusting some fine sentiments into a very SMiLE-like melody. The other is the odd title "Christmasey," written with Jimmy Webb, a bright song with a kinetic power that makes it the highlight of the record. Surprisingly, Wilson doesn't shy away from the sacred material -- in fact, nearly half of the songs are hymns -- and sings multiple verses of "Hark the Herald Angels" and "O Holy Night" like he's reading straight from the hymnbook (except for the excellent new vocal arrangement he writes for the beginning and outro of the former). Wilson's oddly emphatic vocals don't quite suit the Christmas concept, but the arrangements and treatments are very good; the long instrument list and sound will be familiar to Beach Boys fans who have long since memorized the credits on Pet Sounds and SMiLE. Only two choices are puzzling: "God Rest Ye Merry Gentlemen" definitely doesn't benefit from a backbeat, and things get a bit confused on "The Man with All the Toys" when the band essays a single line from "O Come All Ye Faithful" ("let every heart prepare him room") and the listener starts wondering whether they're still talking about Santa Claus.

One nice fillip for Beach Boys fans is how Wilson consciously swipes the beginning of the Ronettes' "Be My Baby" (long recognized as his favorite song) for the bonus track "On Christmas Day."