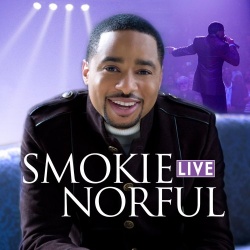 The concert medium particularly suits an energetic gospel performer like Smokie Norful, as was apparent on his 2003 release Limited Edition, but this album really shows off his rapport with his audience. Norful's primary influences are the pop-soul music of '70s Stevie Wonder and '80s Lionel Richie (Richie's "Jesus Is Love" is performed here in a duet with Heather Headley), and like those singers he has an expressive tenor.

He uses it in call and response choruses with a small gospel choir over dense, keyboard-dominated arrangements, repeating phrases praising God as he whips up the crowd. "God's gon' do it!," they intone over and over on the opening track, "He's Gonna Come Through," and similar sentiments pervade the rest of the album. Norful stays timely in his lyrics. "I thought we'd never see the White House, but I'm claimin' it!," he declares in "Justified," while acknowledging, "The economy's down," at the start of "Don't Quit." As those titles indicate, whether he is pleased or dismayed by the state of the nation, it's all fodder for the basically upbeat, inspirational message he has to convey. The recording shows signs of being edited, with several tracks fading out instead of ending in applause, which quells the excitement now and then. But Norful is in his natural element before an audience, and he shines on this disc.

Spencer the Gardener - The Gobble Song