The first edition of Mytha's Swiss Alphorn recordings was an experiment in offering the sound of this primitive, very organic trumpet to the world. The Alphorn has many cousins in the world in Tibet, Australia, China, and elsewhere. It is limited in its pitch and tonal ranges since it can only be played in the overtone series (harmonics). Mytha set out to use those limitations to their advantage by accenting the horn is ways it had not been used before. The disc opens with a piece by Hans-Jorg Sommer, the preeminent Alphorn player and composer. As the long drones begin to emerge from the silence and are joined by others in a different pitch, one instrument is picked to solo and create between the three tones smaller polytones that begin to ring and glimmer, vibrate in the sound mix. The rest of the first half of the disc is dedicated to pieces written by Hans Kennel for the explorations of these tonal possibilities where strange minors are augmented so tones are created by the lack of a particular place on the horn and the combination of overtones played in half or quarter tones.

The rest of the recording is comprised of traditional pieces written for the Alphorn, played in the style of Mytha, which is to say, as true folk music without its more modern, caricaturesque deficiencies -- often the Alphorn is now demonstrated for tourists as a sonic postcard of "authentic" Swiss culture. Mytha's approach is a regal one, carrying forth the depth of expression and emotion and musical integrity into every arrangement. While the first Mytha volume was a mixed bag, this one is solid, a gorgeous rendering of the history, development, and innovative possibilities for an instrument from antiquity. As a result of taking this recording in with its deep, resounding sonorities, one can never hear the trumpet the same way again.

Guitarist Calvin Newborn will always be best known for being pianist Phineas Newborn's younger brother. A fine blues-oriented player who at various times hints at George Benson, Grant Green and B.B. King, Calvin has been obscure during much of his career but still plays quite well. His sidemen are good local players with organist Charlie Wood sounding the most accomplished and veteran pianist Donald Brown making some welcome appearances. The material on New Born includes blues, some 1970s CTI-type songs and soul-jazz. Although not essential, the results are enjoyable, with the liner notes answering the question "Whatever happened to Calvin Newborn?" 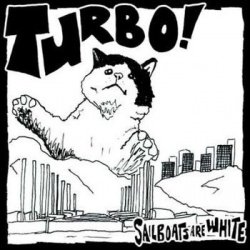 After an initial run on the tiny Canadian indie Let's Just Have Some Fun, Alan McGee's Poptones label picked up the debut by Hamilton, Ontario's Sailboats Are White just in time to miss the boat on the whole synth pop/new wave revival thing. This probably doesn't matter in the long run because although the album's press release tries to connect the band to the wider neo-wave scene, the noisy assaults of Sailboats Are White have more in common with the noisy blurts of early Big Black than A Flock of Seagulls. The combination of a skittering drum machine that sounds perpetually on the verge of malfunction, Chris McInerny's weedy vintage synth lines, and leader Kevyn Wright's distorted, occasionally detuned guitar under Kevin Douglas' shrieky yelp of a voice makes for an often unsettling listen. The band does occasionally settle into something more closely approximating the milder end of '80s post-punk, as on the propulsive and deceptively catchy "Led Eye." But the majority of Turbo! is tinny, needling noise-punk primarily of interest to those whose interest in music is directly proportional to how irritating others find it.

Teddy Berge - Do I Dare

Sonseed - Jesus Is a Friend of Mine

Sonseed is a born-again Roman Catholic rock band that cut one light rock album in 1983 called First Fruit. The band made a second album that went unreleased and broke up. In 2008 a clip of the band playing a ska-flavored song from the album called "Jesus Is a Friend of Mine" appeared on the pop culture site Dougsploitation.blogspot.com. Its irresistible beat, driving bassline, rinky dink keyboards, and the bright pop vocals of bass player, lead singer, and main songwriter Sal Polichetti made it a YouTube sensation with millions of downloads. The band never intended to be professional musicians and only made an album because friends kept asking them for copies of their original songs. (The rest of the set list was made up of traditional hymns that the group arranged for a rock band.) This EP reissue has the band's four original tunes, and a cover of the Edwin Hawkins' Singers' "Oh Happy Day" given a disco-lite arrangement. "Sonseed" is a vaguely psychedelic song that likens faith to a blossoming fruit tree.

Polichetti's high tenor has a pure pop sheen supported by the massed choral of the backing vocalists and some groovy flute work. It's a good tune, but perhaps a bit too sincere for unbelievers. "Another Kind of Love Song" is sung by keyboard player Patricia Costagliola and blends pop and old-fashioned church choral singing.

She has a fine voice, and the song could be a love song as well as a profession of faith. "The Open Door," again with Costagliola singing lead, is less interesting, a typical light rock tune. "Jesus Is a Friend of Mine" is the runaway hit and the EP's best track by far. Its expression of faith is so optimistic it almost sounds like a parody, but once you hear the tune it's impossible to get it out of your head. It could be a kid's song it's so simple, but its driving beat and sharp instrumental track have a timeless feel. Why it wasn't a major hit the first time around is impossible to say; it's so bright and bouncy it's guaranteed to keep you hitting the replay button. There were 17 singers and musicians in Sonseed during its short history. Today one plays guitar in an oldies band, one is a priest, Polichetti still performs in musical theater, and Costagliola made two gospel albums before landing a job as a professor at the University of Washington.